“White Lies – Part 1″ – Monday, September 5, at 10 p.m. (ET/PT)
In attempting to clear up lose ends from their investigation of a gang of White Supremacists, Major Crimes detectives audit the trial of serial killer Dwight Darnell, and end up facing their most deadly case ever while Rusty’s psychologist, Dr. Joe, faces an unexpected confrontation that leaves his life in jeopardy. 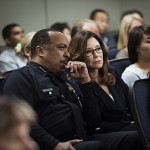