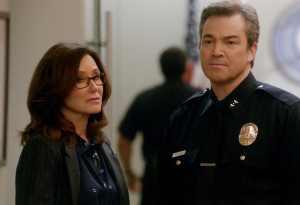 Major Crimes finished its 5th season with a bang, both on screen, and in the ratings.

Wednesday’s explosive season finale brought in a total of 2.9 million viewers, a new winter season high since moving to Wednesdays, and a 20% increase over the previous season high. The episode also hit a season high in key demographics, bringing in 0.3 million viewers 18-49, and won the night as the most-watched scripted cable show of the night.

Last week’s penultimate episode of the season also took in its own first, winning the week as the week as the most-watched scripted cable show for the first time this winter season.

In time-delayed ratings, episode 319 finished its run with 4.66 million viewers in Live + 7 day, almost fully doubling from its Live + SD delivery, and rising over 5% from the prior episode. Greater gains were seen in key demographics, where the episode rose 100% to 0.6 million viewers 18-49.

Episode 319 also came in as the second-most watched cable series of the week, coming in only behind The Walking Dead.

Major Crimes returns for Season 6 this fall on TNT.