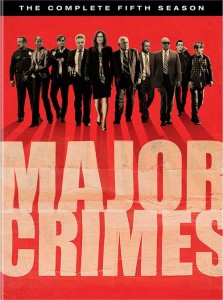 Warner Bros Home Entertainment has announced today that Major Crimes: The Complete Fifth Season will be released on DVD on May 30, 2017.  Featuring all 21 episodes of the fifth season (of which the last 8 begin airing next Wednesday, February 22nd), plus DVD extras including deleted scenes and the ever-popular gag reel, this is a must-have for fans of the show!  See the press release below for more information on the DVD release.

IS SET FOR RELEASE ON DVD

BURBANK, CA (February 15, 2017) – The fifth season of TNT’s powerful crime drama Major Crimes is set for release on DVD from Warner Bros. Home Entertainment (WBHE). Available in stores May 30, 2017, Major Crimes: The Complete Fifth Season will feature all 21 gripping episodes from the hit police drama’s fifth season, on DVD, plus a gag reel and deleted scenes. The show that started as a sequel to the acclaimed police procedural The Closer, has become one of basic cable’s top programs. During Season Five, Major Crimes ranked as TNT’s #2 show and as the #5 series on basic cable television, and has delivered close to 10 million total viewers per episode via all platforms (Source: Nielsen P2+ Reach, Live and DVR, 6 min qualifier; Omniture SiteCatalyst; Bango for Mobile Apps, Rentrak OnDemand Essentials for VOD. VOD reporting is dependent upon data from the individual MVPDs, which is often delayed by days or weeks. VOD numbers are current as of the time they were pulled and should not be considered final.). The five-disc DVD set will retail for $39.99 SRP.

Major Crimes returns with more mysteries in Season Five, as the squad continues to work some of the most challenging murders in the City of Angels. From searching for a missing teenage girl who vanished while helping the homeless, to hunting down the killer of a potentially dirty cop and following up on a beheading in an isolated corner of Los Angeles, cable’s favorite investigators work to arrest and deal out a succession of criminals and killers.

Outside of their work, each member of the team must balance their work and personal lives. Captain Raydor strives to push her adopted son Rusty, (Graham Patrick Martin, The Closer, Two and a Half Men), through college, while figuring out where she wants to go in her ongoing romance with Andy Flynn; Julio Sanchez decides to try to adopt a child himself; Provenza develops sensitivities related to his new marriage to Patrice (Dawnn Lewis); Buzz Watson picks up the 30-year-old murder investigation of his father and uncle; Mike Tao wins an award for his work as a Hollywood consultant; and Amy Sykes confronts the idea of motherhood versus focusing on her career.

Major Crimes is produced by The Shephard/Robin Company and Walking Entropy, Inc. in association with Warner Bros. Television. The Closer’s James Duff, who also created the series, is an executive producer alongside Duppy Demetrius, Mike Berchem, Adam Belanoff, Rick Wallace, Greer Shephard and Michael M. Robin. Major Crimes has been renewed for a sixth season on TNT.

Season 4 of Major Crimes hasn’t even finished airing yet, but today Warner Bros has announced that Major Crimes: The Complete Fourth Season will be released May 24, 2015. Featuring all 23 episodes of the fourth season, plus DVD extras including deleted scenes and the ever-popular gag reel, this is a must-have for fans of the show!  See the press release below for more information

Five-Disc DVD Set Will Include All 23 Season Four Episodes

BURBANK, CA (February 3, 2016) – Warner Bros. Home Entertainment (WBHE) brings season four of TNT’s powerful police procedural Major Crimes to DVD May 24, 2016. Titled Major Crimes: The Complete Fourth Season, this release features all 23 episodes of the series’ fourth season, plus never-before-seen extras including deleted scenes and a gag reel.  The show that began as the highly anticipated continuation of the critically acclaimed, award-winning series The Closer, has now become one of TNT’s most-watched programs and one of cable TV’s top programs. During season four, Major Crimes ranked as TNT’s #2 show and as the #5 scripted drama on basic cable television.* Currently, the full fourth season of Major Crimes is not available to stream via any SVOD service. The five-disc DVD set will retail for $44.98 SRP.

During the fourth gripping season of Major Crimes, our favorite squad of detectives is put in charge of solving a series of intriguing new cases. The unit investigates a double homicide that’s related to an ongoing string of home invasions in the Hollywood Hills; a dead body that comes out of the trunk of a crashed car at the end of a police chase; the murder of a super model; a YouTube video of a bloody, partially naked man walking down a street which goes viral; the deaths of four wealthy people who are killed during a high-stakes poker game; a murder that happens during the taping of a reality competition show; the death of a young man who was pushed off the top of a parking structure and several other fascinating cases.  As season four unfolds, Captain Sharon Raydor’s adopted son, Rusty Beck (Graham Patrick Martin, The Closer, Two and a Half Men), finds a passion that drives him, investigative journalism, as he works to uncover the identity of a murdered runaway.  It’s an exciting season filled with captivating cases and engaging stories about the lives of the officers and prosecutors whose job is to deal with LA’s most high profile and sensitive crimes.

“With its thought-provoking storylines and stellar cast, Major Crimes keeps viewers coming back for more. Each new season is more outstanding than the last,” said Rosemary Markson, WBHE Senior Vice President, TV Marketing. She added, “We’re excited to offer consumers another season of this remarkable series.”

END_OF_DOCUMENT_TOKEN_TO_BE_REPLACED 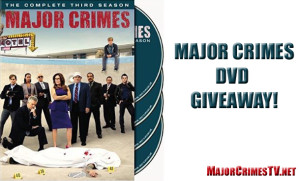 To celebrate the upcoming release of Major Crimes: The Complete Third Season on DVD May 26th we are offering a chance for you to win a copy before you can buy it in stores, thanks to our friends at Warner Bros Home Entertainment!

Please note that the winner must reside in the U.S. (Sorry, Canada and International fans – we promise to get something for you soon!)

Click here for for more information on the Major Crimes: The Complete Third Season DVD release! 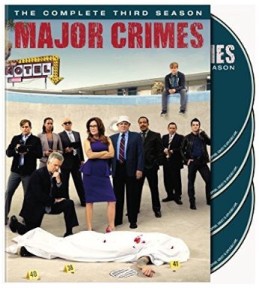 Great news, Major Crimes fans! Warner Bros has announced that Major Crimes: The Complete Third Season will be released May 26, 2015. Featuring all 19 season three episodes, deleted scenes, and the always-popular gag reel, this is a must-have for all fans!

UPDATED 3/11/15 – Advanced cover art for the DVD’s have been released, the set is now available for preorder on Amazon.com.

BRINGS ONE OF TNT’S MOST-WATCHED SERIES

WITH THE RELEASE OF

BURBANK, CA (February 25, 2015) – Warner Bros. Home Entertainment (WBHE) brings the third season of one of cable television’s most powerful police dramas to DVD, with the release of Major Crimes: The Complete Third Season.  Available in stores May 26, 2015, this release features all 19 of the series’ season three episodes plus never-before-seen unaired scenes and gag reel. The show, which spun off the critically acclaimed, award-winning The Closer, has quickly established itself as one of basic cable’s top programs. During season three, Major Crimes ranked as TNT’s #2 show and as the # 3 scripted drama on basic cable television *.   The release of Major Crimes: The Complete Third Season is timed to the show’s fourth season premiere on TNT. The four-disc DVD set will retail for $59.98 SRP. Order due date has been set for April 21, 2015.

Season three finds the unit involved in a series of startling and complex cases. The detectives investigate the death of a canine that inherited his deceased millionaire master’s fortune; a young runaway who is found murdered in a trash can; a woman who confesses to killing her rapist; a series of young girls who disappear from a nightclub; a father and two young kids who go missing and several other captivating mysteries. The third season also brings the return of homeless teen and material witness Rusty Beck (Graham Patrick Martin, The Closer, Two and a Half Men), who is taken in — and adopted — by Captain Raydor. It’s a thrilling season filled with intriguing cases and compelling stories about the lives of the officers and prosecutors who work together to rid the streets of Los Angeles of some its worst criminals.

“Major Crimes has quickly developed a devoted fan base. Fans of The Closer now have a spinoff that stands completely on its own. We’re delighted to release another exciting season of this exceptional series on DVD,” said Rosemary Markson, WBHE Senior Vice President, TV Brand Management and Retail Marketing.  She added, “Major Crimes keeps getting better and better with each season. Mary McDonnell in the lead is superb and the rest of the supporting cast is outstanding.”

NPR praised Major Crimes as “…good, solid television,” and Yahoo TV says, “[The] fact that Major Crimes can veer from the grim…to the gleeful…is due in great part to the diversity of the cast.”

Warner Bros. Home Entertainment (WBHE) brings together Warner Bros. Entertainment’s home video, digital distribution and interactive entertainment businesses in order to maximize current and next-generation distribution scenarios. An industry leader since its inception, WBHE oversees the global distribution of content through packaged goods (Blu-ray Disc™ and DVD) and digital media in the form of electronic sell-through and video-on-demand via cable, satellite, online and mobile channels, and is a significant developer and publisher for console and online video game titles worldwide. WBHE distributes its product through third party retail partners and licensees, as well as directly to consumers through WBShop.com and WB Ultra.

Warner Brothers has announced that Major Crimes: The Complete 2nd Season will be released on DVD on June 10th, 2014.

From the press release:

Major Crimes is back on the case for a thrilling second season as two-time Oscar nominee Mary McDonnell continues as Captain Sharon Raydor, the head of the LAPD’s Major Crimes division, joined by an unforgettable ensemble cast. As the second season opens, the team immediately dives into some of the most challenging and fascinating crimes yet, including the murder of a big-time film producer’s wife, an apparent murder-suicide and a high-speed car chase that leads to a triple homicide.

Just as the squad seems to be adjusting to last year’s leadership change, Deputy District Attorney Emma Rios (new series star Nadine Velazquez – Flight, Hart of Dixie) arrives to challenge Raydor’s intentions and shake up the department. Torn between what is right morally and what the law commands, Raydor and her team are faced with more personal and professional struggles than ever as they continue to make deals and crack cases.

The 4-DVD set will include all 19 episodes from the 2nd season, as well as the following special features:

The set is available now for pre-order on Amazon.com 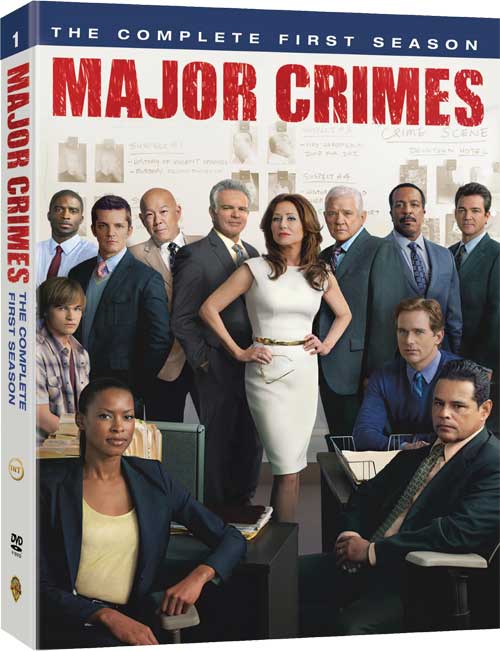 Canadian fans of Major Crimes, we have some good news for you!

Word came today that the Major Crimes Season 1 DVD set will be released in Canada on June 11th, 2013. The 3-disc set is priced at CDN $41.04 MSRP, and will come with all 10 season 1 episodes plus these extras:

You can pre-order the set on Amazon.ca now!

The season 1 DVD set will be available in the US on June 4th, 2013- more information can be found here.

Finally! After months of waiting, the DVD set for Major Crimes season one has finally gotten a release date, and we’ve got your first look at the cover art!

“Warner Home Video has announced Major Crimes – The Complete 1st Season for DVD is coming to stores on June 4th. The 3-disc set priced at $39.98 SRP, and comes with 10 episodes plus these extras:

You can pre-order the set on Amazon.com now!