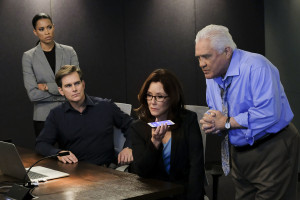 As Major Crimes prepared to film the two-part finale to season 5, there was some question whether what they were filming would be a season or series finale. Several versions of the script were prepped by the writers, and just days before filming on the “Shockwave” arc began, TNT renewed the show for season six, and tonight the season finale of Major Crimes airs at 9pm/8c.

In part one of our interview with series creator and writer of tonight’s episode, James Duff, he discusses in what ways the late renewal affected tonight’s season finale, and how it feels to be celebrating a combined 200 episodes in the world and characters of The Closer and Major Crimes. Stay turned for part two of our interview tonight, after the episode airs.

MajorCrimesTV: Last week’s episode was a real nail biter, and going into tonight, I have a lot of questions about what’s going to happen. And in terms of bad guys, it seems like Christian Ortiz rates right up there with some of the biggest foes the team has ever faced, right up there with Phillip Stroh and the Chris Wood character from the Poster Boy arc a few years ago. Was that an intentional choice to just put everything into this character and story?

James Duff: Most of our finales on Major Crimes center around a really bad guy you get to know. And Chris Wood is a fantastic example of someone we employed in that capacity. And by the way, look what happened to his career afterwards! He exploded. He’s such a fantastic actor. And the same thing is going to happen with this guy. He’s in “The Fate of the Furious”, coming out this weekend. So, we just got him at the right time. He was awesome and fantastic in this role.

But what’s really good for Major Crimes is when they face a foe who is formidable. Nothing is better than a formidable foe. And what we’ll find out tonight is that this guy is both deeper and more destructive than you thought possible. It’s the bomb at the graveyard that’s telling you he was willing to do anything. What he does tonight will convince you for sure. Those pictures that he took will come back to haunt him. We see those pictures and they have a role to play in how he’s apprehended.

MCTV: Rusty also faces a foe of his own tonight, when he meets Gus’s boss.

JD: Yes. We meet Aiden, played by Keegan Allen, who is formidable foe for Rusty, in that his interaction with Rusty is something we’ve never seen before.  Someone really putting the kid over a barrel and forcing him into doing something extremely adult and extremely loving, which turns out to be an amazing response for Rusty. 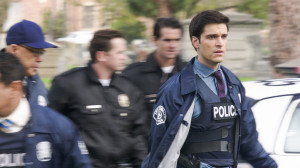 MCTV: One of the few lighter moments in last week’s episode was courtesy of Nolan, who called out Davis on her aspirations for the chief job. Are we going to see Nolan, now that he’s settled in more with the team, flying off the cuff a bit more and calling things the way they are?

JD: Nolan has been holding back and he’s been trying to find his way. But he’s also been in really desperate situations before and he doesn’t like the way Winnie Davis is treating people, and he’s like, “to hell with it,  I’m gonna say what I’m thinking here.” And I thought Daniel (di Tomasso) did a great job with that. He was so excited when he got that little exchange. None of our regular crew could have done it, because we don’t have a character like that in our regular crew. Provenza will sometimes get in people’s faces and even Sharon will sometimes say to a commanding officer “Do you want to cover this case, or would you like me to step aside?”, and diplomatically find a way to address it, but she would never do anything like Nolan did. Which was actually attack the character of a commanding officer. I loved it, personally.

MCTV: It was great, and you could tell the others loved it, and were also terrified for his future at that point forward. It also brought about a great moment for Sharon, too, where she says very clearly, “this is where I want to be, this is what I want to do, and quit screwing it up for me!”

MCTV: Between last week and tonight’s finale, these are two very big episodes in scale, especially with all the explosions, the locations, etc. What goes into getting these huge episodes, with all the effects, together?

JD: What we do is just hours and hours of preparation, so that we have everything we need in place, and we’ve tried to consider every stupid thing we might do wrong, and really work very hard to get it right the first or second time. The way you get to have really big episodes like this is by being extremely careful with your budget as you go along. So that you’re building a pool of cash that you can employ at the right moment to deliver an optimal experience at the end of the season.

MCTV: When you were writing it, you’ve said you thought it could potentially be the end of the series. Did that figure in?

JD: Exactly. You know, we also had every reason to believe that this was the end of the series. And I think if you watch it with the idea that we almost ended the series here, then you can see how we opted to put everything we had into it. 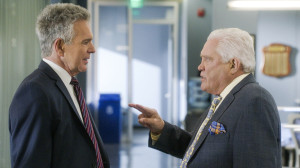 JD: If you put it in perspective, I’ve spent all of elementary school, middle school, high school and my first year of college in this world. (laughs) It is been like living inside a learning experience. And if you want to live inside a learning experience then this is the way to do it. I never could have imagined two hundred episodes. It just boggles the mind, especially going from the end of The Closer, to already be looking ahead to the hundredth episode of Major Crimes next year.  I mean, I thought it was possible, but not likely. But three people absolutely believed it would happen. And they were Tony Denison, Phillip Keene, and Raymond Cruz. The rest of us, and even at the network, there was curiosity and good intentions, but doubt.

And so I credit the audience, honestly, with getting us through that transition and sticking with us, and holding onto our characters. I guess, in addition to being a learning environment, the two hundred episodes that we’ve done, they’ve allowed me to grow close to the audience in a way I don’t think you get an opportunity to do very often. The social platforms that are available now have enhanced that opportunity. I feel incredibly close to the viewers and am incredibly grateful and thankful to them for electing to be a part of this community.

MCTV: Anything else you want to tease about tonight’s episode?

The Major Crimes season finale airs tonight at 9pm/8c on TNT. Read part two of our interview with James Duff tonight, as he discusses what might have been different if the episode had been a series finale, and what we can expect when Major Crimes returns next fall.