CAUTION – the below includes spoilers for Wednesday’s season finale of Major Crimes. Do not read if you have not yet seen the episode and don’t want to be spoiled!

In Part Two of our exclusive interview with James Duff, we discussed some of the most shocking (blowing up the squad room!) and long-awaited (Commander Raydor has a nice ring to it, don’t you think?) moments of the season finale, and what’s ahead for the team when it returns next fall for Season 6.

MajorCrimesTV: So, first of all, wow! That was a very nerve-wracking finale, and then right at the end, it packed a big emotional punch!

James Duff: I agree. And also, I want to point out how well-directed it was all the way through. Patrick Duffy did a great job of last week’s episode and Michael Robin did a fantastic job of the finale, and it all worked very well. Very happy about it.

MCTV: I saw that explosion and thought, wow, I don’t know if they would have blown it up if they knew they were going to have to put it all back together again for the next season! 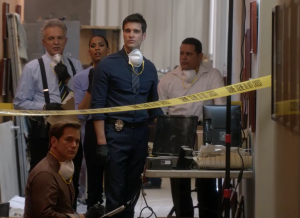 us a chance to refresh the room a little bit. That set has been there for seven years, we’ve been using it exactly the way it is. And police work has evolved. The white boards are still important, but police work is evolving and we need to evolve with it. Also, when you live on a set for seven years, you get to know not only strengths but also its weaknesses. It gives us an opportunity to fix the weaknesses of the set while holding on to its strengths. It’ll look very familiar and it will look a little different, too. But not very different.

MCTV: We had one moment in here that was years in the making, and that was Raydor’s promotion. It was a long time coming, and a beautiful moment to watch. Why now, and when Asst. Chief Mason says there are changes coming, what kind of changes are we talking about?

JD: I think you can expect two things. One is that the promotion freeze is over at LAPD and Major Crimes used to be led by a Deputy Chief and Raydor certainly deserves to be a Commander, and I think everybody would agree that that promotion was well-earned. And also, gosh, just to see Mary play it! 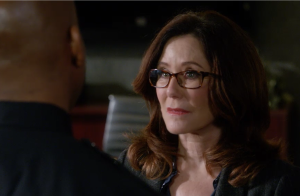 It was wonderful, because Mary had asked, will she ever get to be a commander, and she lives inside this character so much that Sharon’s promotion–felt real in a way that really came across on-screen. And also because the emotion of having a woman struggle for that job and get it, it was very important to see, I think. And then as a reward for the long game that Sharon usually plays. And then I would say the way Major Crimes is going to change is that Major Crimes is going to be deployed as Mason sees fit. And the cases are going to get bigger. We’re going to be in more of the multi-part universe from now on. Our first five-parter next season is called: Major Crimes: Sanctuary City and it’s not at all what you think. I will say it involves a legal immigration, it involves the Catholic church, illegal drug use, and a trio of missing fifteen-year-old boys.

MCTV: Winnie Davis certainly made no friends this season. Is this the last we’ve seen of her? Is she out now or is she going to be a thorn in everyone’s side in whatever capacity she can manage.

JD: It’s the last time we will have seen her as an enemy. If you see Winnie Davis again, she will not be an enemy.

MCTV: Flynn he had a great moment at the end of this episode. But earlier on, Provenza says “for you to go back out in the field, the right person has to be become assistant chief.” Has the right person become the Assistant Chief to get Flynn back out there?

JD: Not yet.  He’s going to have to struggle for that. But, also, there are going to be some big emotional problems next year, and that may be not something he’s as concerned about. Everybody is going to be facing some adversity. Not to mention the spectral presence of Stroh sort of glowering over the whole thirteen episodes.

But overall, I just want to say that we are very excited about this episode and the way our season ended and we’re incredibly excited that we get to do it again for another thirteen episodes. And hopefully we can spend a little more time together.