Season 3 may have just begun filming, but Major Crimes is already breaking records for 2014! TNT has announced that the ratings success of the winter episodes of Season 2 has propelled Major Crimes into the top spot as TNT’s most-watched show of Quarter 1 of 2014, beating out previous ratings darling Rizzoli & Isles.

Moreover, with 7.4 million viewers in Live + 7 delivery, Major Crimes now ranks as one of basic cable’s Top 3 original series for the quarter, the only one of TNT’s shows to make the list. In the 25-54 demographic, Major Crimes scored 2.2 million adults, placing it in the Top 10 for the quarter.

Congrats to the cast and crew for this prestigious honor!

Season 3 of Major Crimes premieres on June 9th at 9pm/8c on TNT.

MajorCrimesTV.net would like to congratulate the cast and crew on their final day of prinicpal photography of season 2. Thank you for all for your hard work, and we can’t wait to see what surprises you have in store for us all! 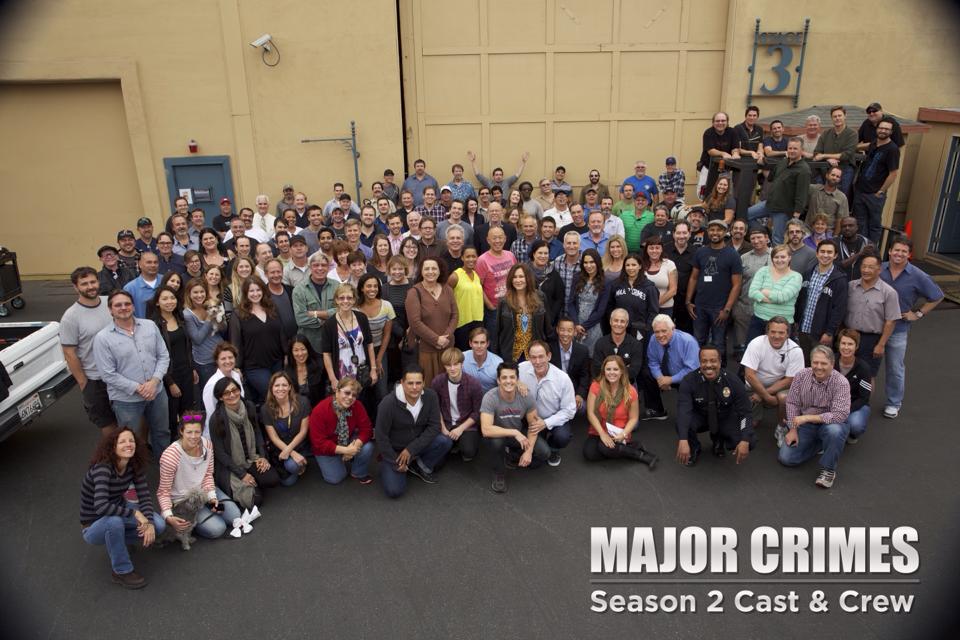 TNT’s hit drama series Major Crimes, which fired up summer as one of basic cable’s Top 10 dramas, returns this winter with eight powerful new episodes. Oscar® and Emmy® nominee Mary McDonnell stars as Los Angeles Police Captain Sharon Raydor, who heads up a special squad within the LAPD that deals with high-profile or particularly sensitive crimes. The series is set to begin its winter run Monday, Nov. 25, at 9 p.m. (ET/PT), with the season finale set for January 13.

This past summer on Major Crimes, Raydor and the detectives in the squad finally settled into a good working relationship. But they are now under the watchful eye of Deputy District Attorney Emma Rios, who has been assigned to shadow investigations and work with Raydor’s team to build successful cases and secure plea deals whenever possible.

Throughout the summer, Rusty struggled to come to terms with his past and his own emotional turmoil. His close friendship with a female classmate showed signs of bringing his life some sense of normality, but Rusty pushed her away for reasons he refuses to explain. And Rusty’s distrust of DDA Rios will continue to grow as her actions make him begin to question her intentions.

In the winter episodes of Major Crimes, the squad will be called upon to investigate the deaths of two brothers who may have died as a result of a bad batch of drugs, track down a recently released prisoner whose therapist has concerns he could be dangerous and follow a money trail full of surprises when a body turns up at a posh country club. The winter episodes will also reveal the mysterious person sending threatening letters to Rusty and Raydor, and Rusty will finally testify against Phillip Stroh in a preliminary hearing. Jon Tenney – who played FBI Agent Fritz Howard on The Closer and the first season of Major Crimes – returns to direct the Dec. 16 episode and will guest star in two episodes.

TNT’s Major Crimes launched in 2012 and finished its first season ranking as basic cable’s #1 new series of the year. The drama returned earlier this year for its second season, averaging 6.9 million viewers in Live + 7 to rank as one of basic cable’s Top 5 summer series. In key demos, Major Crimes has averaged more than 2.1 million adults 25-54 and 1.6 million adults 18-49 in its second season.

Major Crimes is produced for TNT by The Shephard/Robin Company and Walking Entropy, Inc., in association with Warner Bros. Television. The Closer’s James Duff, Greer Shephard, Michael M. Robin, Adam Belanoff and Rick Wallace serve as executive producers on the series. The show is produced by Andrew J. Sacks 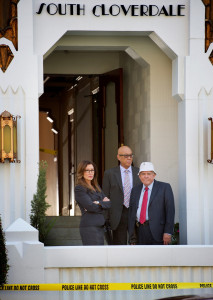 A new review on NashvilleScene.com takes a look at the success of Major Crimes as it goes into tonight’s chilling mid-season finale.

“There was plenty of skepticism when TNT opted to retain most of the cast from The Closer two years ago, folding those characters into a spin-off titled Major Crimes. The biggest problem was widespread doubt the producers could create another breakout character like Kyra Sedgwick’s Brenda Johnson, whose personality and charisma often elevated otherwise routine episodes and kept the audience’s attention in situations ranging from odd or silly to chaotic and powerful.

Major Crimes‘ first season focused on her promotion and battle to gain the trust of her comrades, the identical struggles Johnson endured during The Closer‘s formative period. Duff added another twist with the presence of teenager Rusty Beck (Graham Patrick Martin), also initially introduced in a strong late-era episode of The Closer. Beck was and is a witness in the Phillip Stroh case, but Raydor’s decision to bring Beck into her home proved both unexpected and intriguing. The growth of their relationship has been a key element throughout the show’s second season.

The program also added a new cast member in Nadine Velazquez, who portrays prickly DA Emma Rios. While Rios’ primary job is to prosecute the pending Stroh case, she often gets involved with the team’s other cases. She also frequently clashes with Raydor, because she views her ties to key witness Beck as detrimental to getting a conviction.

During its first season, Major Crimes was TNT’s No. 1 scripted drama in the ratings. The program’s performance improved in Season Two, and it did so well TNT increased its episode count from the original order of 15 it to 19.

Tonight’s season finale again forces Capt. Raydor to make heat-of-the-moment decisions that end in controversy. This time the squad’s after a psycho on a killing spree, with every victim earning more unwanted media attention. The way Raydor handles the situation will have a huge impact on both her future and that of the Major Crimes unit — but you’ll just have to tune in to see how.”"

New extended footage of Mary McDonnell’s interview with the Associated Press prior to the Season 2 premiere of Major Crimes. 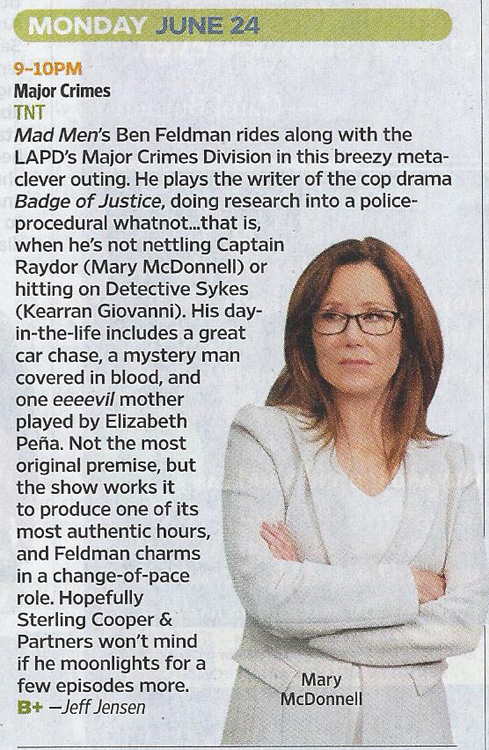 6/19/13- Updated with new extended version of the promo