This season on Major Crimes 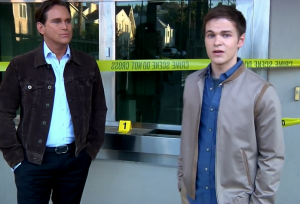 has seen Buzz and Rusty team up to reopen the unsolved murder of Buzz’s father. Through both storylines in episodes, as well as Rusty’s web-excusive series Identity, the two have explored the circumstances surrounding the cold case, and seek to finally find some resolution for Buzz and his family. So it seemed only natural for us to sit down with both Graham Patrick Martin and Phillip Keene together, to discuss Buzz and Rusty’s new partnership in crime-solving, and what we can expect from both of their characters moving forward this season.

MCTV: This year has been a great year for both of you. Phillip, you’re having a great year with Buzz’s storyline, and Graham, Identity continues to be wonderful with Rusty as well as his storylines continuing. You’re about halfway through filming this season now – how has it been going for both of you?

Phillip Keene: We’re finishing up episode 9 and things have been going great. I mean, Graham has always been excellent at memorizing dialogue – and quite frankly I haven’t had that much dialogue to memorize in such a long time that it was a bit of a challenge for me. But the more that I do it with these episodes of Identity, the easier it becomes. And I just love the fact that you get to see more of my character’s background, so it gives me a lot to do, and I love working with Graham. He and I did a four-page scene a couple weeks ago and we were able to get it filmed in under an hour – it was great! The crew were happy, we loved it, it was just nice playing off of somebody who works as well as he does.

Graham Patrick Martin: Thank you Philip. I am a such a huge fan of the show, and I’ve always been a huge fan of the Buzz character, and so it’s been fun playing with that sort of brotherly relationship that Buzz and Rusty have always had. I’ve always been really anxious to dig deeper and to learn more about Buzz and what’s motivated him to be where he is. So that’s what this whole Identity Buzz and Rusty crossover has done for me. It’s really been an awesome platform to dive into the character of Buzz, who I feel like is one of the characters who we don’t know as much about as the others.

PK: And it’s really cool because in the beginning I was sort of Rusty’s mentor and in terms of bringing him into the fold, and now the roles are slightly reversed in that Rusty already has this Identity and journalism thing established and he’s bringing me out of my shell and exposing more of who I am. END_OF_DOCUMENT_TOKEN_TO_BE_REPLACED

Check out Rusty Beck’s V-log, Identity, and he works to track down the real name and family of Jane Doe 38 aka “Alice Herrera”