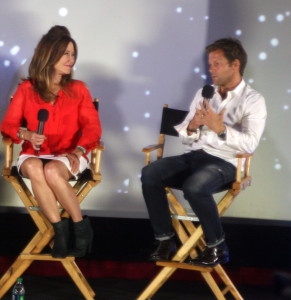 Mary McDonnell and Jamie Bamber at a 2014 Battlestar Galactica reunion event in Hollywood, CA hosted by the LA Times.

The President and Captain Apollo, reunited?

MajorCrimesTV.net has learned that Jamie Bamber, who starred as Lee “Apollo” Adama alongside Mary McDonnell on the hit SyFy Channel series Battlestar Galactica will once again pair up with his former leading lady for episode 403 of Major Crimes.

The episode, scheduled to air June 22nd, features Bamber as “a pompous celebrity photographer with boundary issues”, according to the episode description.

Our only question is, will someone utter a “so say we all” for old times sake?

Don’t forget to tune in for the Major Crimes season 4 premiere, Monday June 8th at 9pm/8c on TNT!