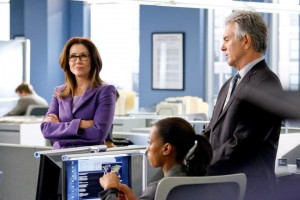 “There are a handful of actors whose presence alone transforms a television show into a Can’t Miss TV Event! Such was the case when Mary McDonnell joined The Closer in 2009 for a three-episode arc. The response to her character, Captain Sharon Raydor, was so strong (both behind the scenes and in the real world), that producers wisely extended her time on the show — and then crafted a spin-off explicitly for Mary to carry.”