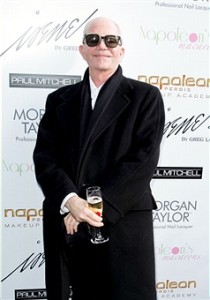 As part of our new weekly series “Inside the Fitting Room” we spoke to Major Crimes costume designer Greg LaVoi to get an inside look at the fashion and costumes behind last week’s episode, “Moral Hazard.”

MajorCrimesTV: The last few episodes have each taken place over several different days, and thus each character has had several different costume changes. In contrast, this episode took place all over one day, and as such, everyone (with the exception of the Jere Burns character) had just one costume all episode. It very much helped make it clear that the episode was in the same day, and it really contributed to the intensity of that.

Greg LaVoi: Exactly. In something like this, it’s such a real episode, very reality based, so you have to believe that that it’s real, and that the clothes are part of the story, but not in an obvious way. I love going to a film or watching a TV show where you don’t even notice the clothes because then I think that truly is a successful designer, having success with the clothes, and making them very real to the story.

MCTV: Sharon Raydor and the rest of the team just had the one costume throughout the episode. What was she wearing for this? 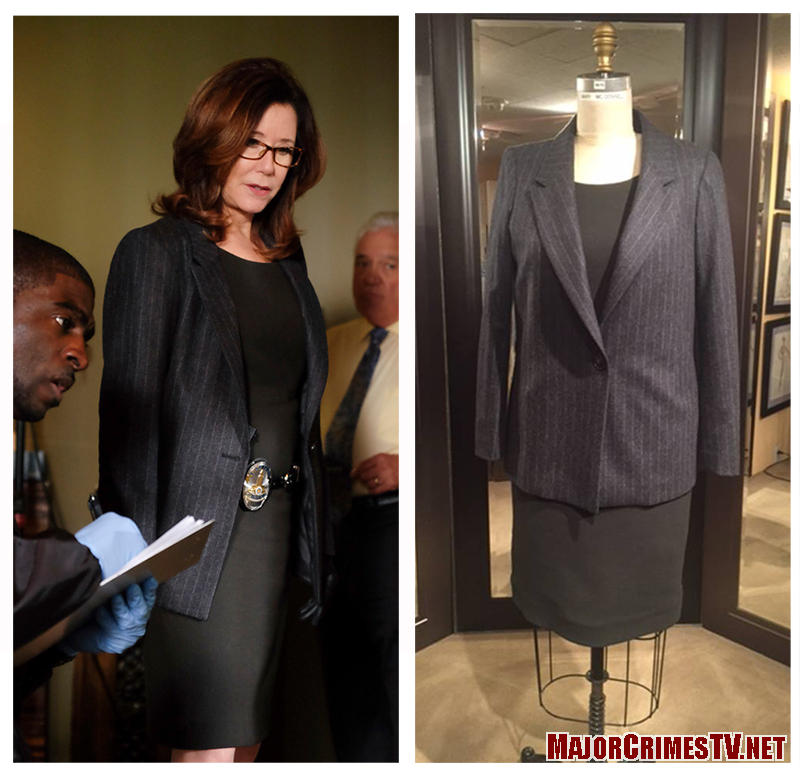 MCTV: Patrice’s sundresses were such a breath of fresh air in this episode – bright and summery. How did you decide on them?

GLV: Dawnn (Lewis) is honestly so much fun to dress because she knows her body, and she knows what looks good on her. The first time we met her, it was tough, because she didn’t know us, we didn’t know her. I knew what I wanted the character to look like, but of course there has to be a trust factor built up between myself and the actors. That’s so important with a costume designer and their actors, is to develop that trust.

But after I figured out how she worked, and how she liked to do fittings, it became much easier. She knows her character, and her body. So now what we do is put together a rack of clothes that I like, that would fit with the story and that I would be happy with having on camera, and let her choose what she wants to wear. Since nothing on that rack is something I wouldn’t want to see on camera, it gives Dawnn the ability to look through the rack and decide what she likes, and what she thinks is going to be best for her. So now, it’s gotten to where we have great fun in the fitting room, and so much of that is just because of having earned her trust. 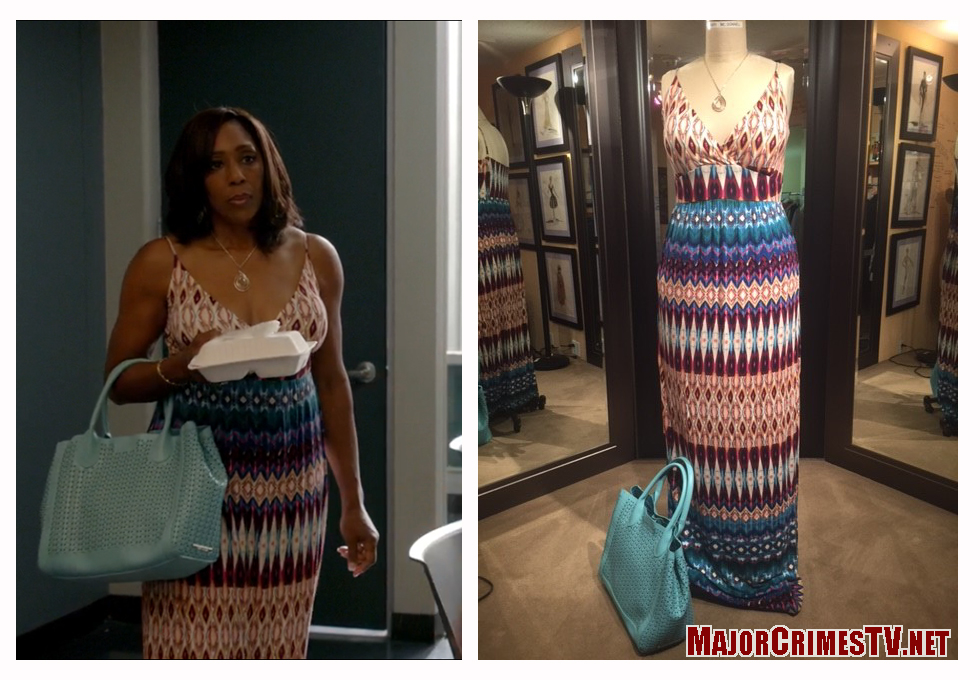 MCTV: So, tell us about the dresses used in this episode.

GLV: Dawnn and I decided on a muti-colored Felicity and Coco dress for her first scene. I had originally wanted that dress to be the dress she goes to dinner in, and then when we actually put the looks together, it was like, ‘No, she’s been out shopping, she’s getting him lunch, so it needs to be more summery’. So together we chose this long sleeveless, little strappy maxidress to be that dress that she was just shopping around in. Her sandals were actually her own, with her own toe rings.

MCTV: Her necklace was very striking to me – what was the history on that?

GLV: The beautiful silver necklace she wore was a Tara Reynolds Designs. Tara is married to Cory Reynolds (Gabriel from The Closer) and she’s an amazing designer, and we’ve featured her jewelry on the show for many years. 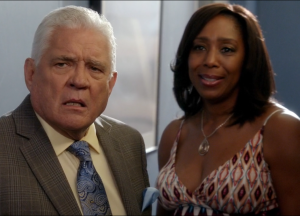 It’s just great to find jewelry sources that are not from department stores so you can have a conversation with the designer. Often, for example with Tara, I’ll call her and say I need something specific, and she’ll come by the studio with some options, and I’ll wind up buying several pieces for use in the future. And if she doesn’t have it, she’ll make it. And ultimately it’s great for those designers to get to see their designs on-screen. 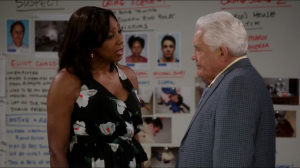 GLV: For the last scene with Provenza, to go to dinner, it was a Banana Republic dress, and I loved the big flowers on it, it was beautiful. I love showing off Dawnn’s figure, and so it’s not overly done and it’s still very sexy. And with that, again we used her own jewelry – bracelet, rings and gold hoops. She’s a fun character to dress.

MCTV: I noticed that the hotel characters all had a similar theme to their uniforms, just as they would in any business like this. How do you go about designing entire look for that? 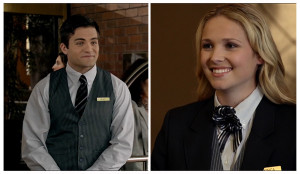 GLV: We’ve had fun this season because we’ve had a lot of hotel and restaurant scenes. I’m tired of doing valets in red jackets and black pants, or waiters in black vests and white shirts and black pants. So each of these episodes that have had a hotel or a restaurant, we’ve really given a lot of thought to the characters and what that hotel staff would wear. We’re usually not allowed to use the hotel employees’ real wardrobe. So instead, we get pictures from the location scouts, and those will show us the color scheme of the restaurant or the lobby or the exterior, and on this one it was just fun, because it was supposed to be a very upscale hotel.

Pinstripe was the order of the day, so we did a color story with the grey pinstripe. So everybody in the hotel had some sort of pinstripe in greys. The valets had a plaid tie, and for the front desk staff, I had Esther, my cutter-fitter, design the little rosette that was at the neck. So they had on solid suits and then the pinstriped vests like the valets, and then the little black gray and white striped rosette, where Esther took apart ties and made this lovely rosette for the desk clerk.

I just love it. It’s just so much fun to just create these hotel and restaurant personnel. I’m tired of just the normal, basic everyday stuff that you can rent.

MCTV: One thing I noticed in this episode was that the whole team wore their tactical vests under their jackets, where usually we see the vests without the jacket. Was there a specific reason for that in this episode?

GLV: It was related to the story – in the hotel they had to blend in so that the guests of the hotel weren’t alarmed that a whole contingent of police officers in tactical vests were entering their lobby. So it was a very subtle way to present the tactical gear this time. Those were the standard tactical vests that each character has, nothing special was done to fit them under the jackets. The vests have been adjusted so that they fit fairly perfectly now either under clothes, or without a jacket, however we need to use them.

MCTV: The person with the most costume changes this episode was the character played by Jere Burns. What can you tell us about the different changes he had? 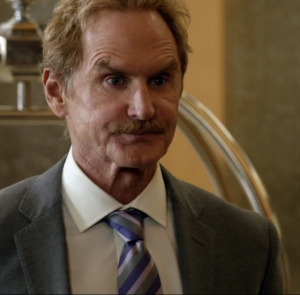 GLV: I’ve worked with Jere before, twenty-some years ago I designed a sitcom called Something So Right and he was the male lead on that. So I’ve known Jere all this time and he’s a great comedian and he’s a really good dramatic actor, too. So I heard he was cast as Elliot Chase, I knew this was going to be a fun one, because he’s very intense as a bad guy.

He had to look like he could blend in because first he was at the one man’s house, killing him, and so we surmised that he maybe stole the jacket that we first see him in from the dead man. It was actually just a GAP jacket. And so when Jere went in there, you know, he had to look normal, so that you wouldn’t be alarmed at him coming in, and then he just blatantly pulled out a shotgun and shoots somebody.

Later when he kidnaps the man in the Jaguar, I put him in J. Crew. Jere looks great in J. Crew – it fits him perfectly, so I combined that and Tommy Hilfiger shirt, and he then became the rich man in the red Jaguar. And it was fascinating to watch how stunts and special effects and everything works together when he took the leap off the balcony. Episodes like these are just fascinating to do and to design.

We’ll be back next week with more from the costume department, and a discussion of the fashion from the next new episode of Major Crimes. For more information about Greg LaVoi’s career, check out our in-depth 2013 interview here, and follow him on twitter @GregLaVoi.

Special thanks to TNT, Warner Bros and Greg LaVoi for making this segment possible.