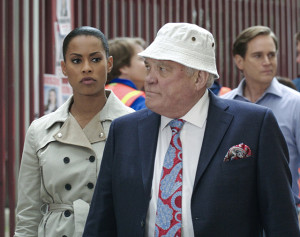 After five seasons of Major Crimes, Sykes and Provenza have learned to rely on each other throughout all sort of situations. We spoke to their portrayers, Kearran Giovanni and GW Bailey to get the scoop about this odd-couple’s relationship, and found the great relationship between them extends far past their characters on the show.

MCTV: You guys are about halfway through filming this season. How is it all going?

GW Bailey: All the scenes that Kearran and I are in are quite wonderful. The others…

Kearran Giovanni: We’re not real sure about–

KG: No, we’re having a great time and it’s going well, it’s going swimmingly. By now we’ve got a nice formula going and everyone knows their roles, and–

MCTV: Sykes and Provenza have always had an interesting dynamic together – do you think that is why?

GW: In this case I won’t say which one’s the beauty, but it is Beauty and the Beast, it’s Laurel and Hardy, fat and skinny, I mean, it’s partnerships. It’s interesting, actually…I’m an older white man, she’s a gorgeous young African-American woman. That makes for a visual interest.

KG: Especially from where we started, obviously. Sykes probably wasn’t his favorite person, and now we work really well together.

GW: Exactly. I trust her and like her and it’s good.

MCTV: Speaking to that evolution of

their relationship, to your minds, how is it that Amy has earned this, this spot with Provenza and his respect after starting off on such rocky footing?

KG: In the beginning, it wasn’t that she didn’t have the drive or the talent or whatever to do well, it was just the way that she went about it. I think she just had to kind of hold her own for a while and show what she really could do the job, and maybe also calm down with her excitement, and then I think he grew to respect her. She’s done a lot, she’s been given a lot of responsibility, she’s taken a lot of responsibility, and she kind of went rogue a few times. And he was one of the ones who always said “Let her do it. She’ll figure it out.” And I did, and I think that’s what garnered that respect.

GW: Well, also, she broke a few rules here and there–not big things, not against the law, but she stretched it and Provenza likes that. A lot.

MCTV: Both Sykes and Provenza have gotten into relationships within the last season or so. Amy’s with Cooper, though we haven’t seen as much of that relationship as we have of Patrice and Provenza. Have those relationships changed the characters for you?

GW: I get to wear a lot of expensive ties and pocket handkerchiefs that Patrice buys for me, and healthy food out of the Tupperware containers (laughs, crunching) Right now I’m eating some Fritos ’cause she’s not here (laughs).

But the question about change, I think that it has changed him. It’s not that Provenza was ever a racist, not in the least. I don’t think he ever thought about it one way or another, people are people. But he now is at least aware–he’s married to a woman of color, and so he has a certain appreciation that perhaps he didn’t have before. It’s not that he disliked anybody, it’s just that he never really thought about it. And that’s how they got together in the first place. My sixth and final wife, Patrice - I put her granddaughter in prison for twenty years. 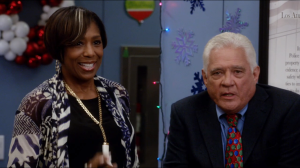 GW: So, a little odd that we play footsie at night and we just don’t talk about the grandchildren!

GW: So maybe that’s why–it’s never been written–but sub-textually what we think about when we’re sitting in these very long murder room scenes is that I have a greater understanding of Sykes because I have a greater understanding of Patrice. And I know some of the battles that she’s had to fight, because Patrice is not shy about telling me in the least .

KG: Well, as far as Amy goes, you know, we haven’t really seen a ton of Cooper, and this season…I can’t give anything away, but Amy’s definitely–you’ll see, there’s going to be a bit of a struggle between what she wants in her career, and what she’s willing to sacrifice in a relationship for it. So we shall see. She really separates the two, there’s no inter-crossing of work and relationship. So hopefully this season you’ll get to see a little bit of that side of her.

MCTV: We’ve heard that one thing Sykes is going to struggle with this season is trying to make a decision about having a career versus having a family…

MCTV: Right? Why else be at ten if you can’t take advantage of it? (Everyone laughs)

GW: Yeah…more likely it’ll be me.

MCTV: Amy has always looked to Sharon Raydor as a mentor for her career, but 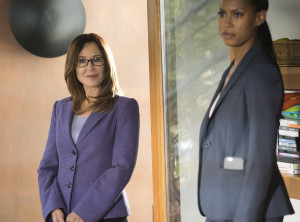 Sharon is also someone who has kept her work and home lives very separate – is that someone Amy is looking towards to help her through this? And also as a working mother yourself, you have dealt with the same struggle that perhaps Amy is experiencing - do you bring any of yourself into that struggle that she’s potentially going through?

KG: With Raydor, obviously yes. I mean Sykes has asked her, “How do you do it?” How do you keep that separate, because she has a real respect for the fact that you don’t see it at work as much as possible. And when I read this season’s stuff and the struggle that she’s having… to be honest, it’s very hard for me to play, only because it is so not what I have done. I mean, I had kids first and then said it doesn’t matter because I always wanted to have kids. I would have had kids no matter what. So for me, the balance of work and children is a life that I always wanted, so it’s very opposite from Amy.

MCTV: GW, a few weeks ago we were on set and got to see the table read for an upcoming episode. And without spoiling anything, there is a focus on the episode around Patrice trying to convince Provenza to retire, and then a situation occurs which sort of puts a finer point on her concerns. Are we going to continue to see that played out, or is Provenza still determined that he’s going to stay in this for the long haul?

GW: Well, I don’t think it’s giving anything away, and quite frankly, I don’t think it matters if we give anything away. People are going to watch anyway, I hope. It’s resolved, really, in this episode, resolved at the end of it. It’s a very wonderful resolution– very smart writing, which we have a great deal of– where Patrice goes back to the art of the deal. And this is what started his relationship with the Captain. In this whole arc, this 5 years that we’ve been playing together, and in the end of The Closer, too, he really objected to deals. Our job is to catch the bad guys. The DA’s job is to put them in jail. And being part of the deal, to do this, do that, he really objected to. He’s come over somewhat, but at the end of the episode you’re referring to, it ends up as a deal, again. It’s sort of a big deal, and it’s sort of a silly deal, but it is a deal. And the final result is–well, I can tell you this, on a personal level– as long as my grandkids are in college, I’ll be here working. Provenza will be working. I may be sweeping the floor but I’ll be being paid as long as they’re in school. 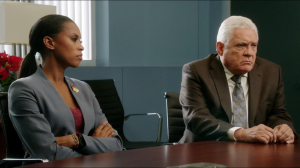 MCTV: As we saw again a few weeks ago, Amy tends to be the one who gets all the chasing and running after suspects. Is she Provenza’s go-to for that sort of thing? He won’t run, so she will?

KG: Thank you! Yes, and you know, I don’t ever mind it, and I don’t complain about it because it gets in all the steps in my Fitbit, so I will run, whenever they tell me to. Fine with me!

MCTV: GW, fans of the show know about your work with the Sunshine Kids. Is there anything coming up that you want to let the fans know about so they can get involved?

You know, we’re all adults here and we know what it takes to do all the events that we put on for the kids, it takes money. So, contributions are always gladly accepted, but so are attendance at events and being part of something. You know, a kid sees a smiling face, it’s just a very positive thing. It just is. We have the big holiday party that will be coming up, this summer we have a huge beach party, we have events on a national level that will be here in LA. Right now we’ve got kids in San Francisco for four days. We had kids over in Catalina last week. So there are many, many events. I suggest always to go to our website, our calendar’s there and you can see what’s happening, and if you want to get involved, you just call and we’ll get a volunteer form to you… or, if you just want to write a check that’s okay, too!

GW: Yes and Kearran has been… maybe that’s another reason for them to have really respected her and fallen in love with her is, on a personal level, her support of these kids has been really great. I mean, it’s not easy– it’s a lot easier for the rest of us to get away and go do something. She came to Dallas for our national convention with our national sponsor, Berkshire Hathaway, and, you know, it’s not easy when you have kids, but she’s always there when we need her, and I applaud that.

MCTV: Well, thank you both for taking the time to speak to us!

GW: Thank you very much. And obviously, I know you hear this, but never enough, thank you for everything that MajorCrimesTV does for this show. You’ve been an invaluable asset to the success of this, and we all really appreciate it.

Major Crimes is all new tonight at 10pm/9c on TNT.