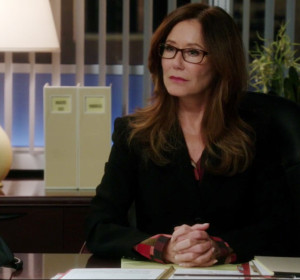 In a new interview with Life Reimagined, Mary McDonnell talks about the unexpected turn-of-events that lead her to role on Major Crimes, now one of the most-watched shows on TV, and how at one point in her career she thought, ““I was at a certain age where I wondered if Hollywood would ever let me work again.”

In the 1990s, the flame-haired beauty played babe roles in Dances with Wolves where she snuggled with Kevin Costner and Independence Day where she was the brave First Lady. A few birthdays later she wondered: Is my career over?

“I’m not 25. I’m not even 40,” says the soft-spoken actress who never dreamed that at 60, she would become the star of Major Crimes on TNT, one of the biggest hit dramas on TV. “I was at a certain age where I wondered if Hollywood would ever let me work again.”

She paved the way to playing Capt. Sharon Raydor, head of the LAPD major crimes division with a surprising move: downsizing her expectations. When she got a call to do a small role on The Closer opposite Kyra Sedgwick, McDonnell didn’t pass because it wasn’t the lead – or the sexy love interest.

“I think you have to change your expectations with age,” she says. “It wasn’t the biggest role to start, but I knew this was a refreshing role because I would work with creative and brilliant people. Meanwhile, I would be playing a female police captain and woman of power. She’s competent in her own skin, but dealing with all the dysfunctional things in her life. This is a woman who gets the job done.”

Then something incredible happened. When The Closer ended, McDonnell got the call to make Capt. Raydor the lead in her own series. “If I didn’t do that role on The Closer, I wouldn’t be here talking about this great show today,” she says.

With this amazing opportunity, she had to shift her expectations once more, and deal with some anxiety. “I had a lot of fears born from an actor always wanting to do well. Could I pull it off?” she says. “That’s when I realized that my fears really did inform this character while speaking to so many real-life women. After 40, it’s about how do you get clear, and how do you practice living a great life. That’s what I try to do.”

The result? “I hear from women all the time who say, ‘Thank you for showing me someone my own age on TV. They can relate to her issues. It’s like meeting up with an old friend once a week,” she says.

The job has helped McDonnell stay in tune with herself. Because she wants to portray women in the healthiest, most beautiful way on the small screen, she says, “I ask for what I need including in this HDTV age asking the cameramen to shoot me in a loving way.” 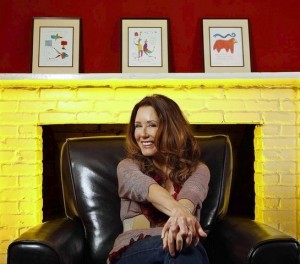 Most mornings you can find her doing laps in the pool at her home in Pacific Palisades. “It’s just you and the water. You can’t be on the phone. You don’t have to run through a laundry list of things to do. You just have to focus on breathing and swimming. It’s not just good for you, but a great way to get rid of any stress.”

Admit What You Can’t Do: “I’m a terrible cook. I need help and ask for help within my family. We work together to create balanced meals.”

Go Inside: “I like to meditate to stay in tune with my body. It also helps you open up and broaden your life.”

Reembrace Childhood Loves: “I was a competitive swimmer as a child and that gave my body a good base. I just have to keep it up at this age. I do advise people to think about how they were active as kids and what they loved and try to incorporate it into a healthy activity now.”