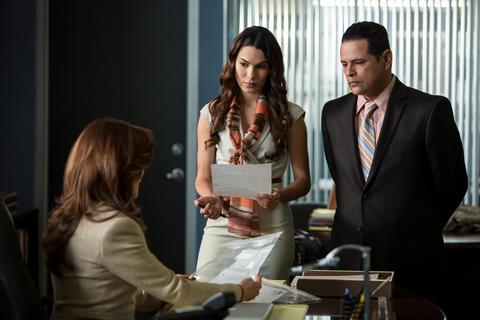 In a new interview with TV Guide, new cast member Nadine Velazquez discusses her characters icy welcome to the squad, and how D.D.A. Rios’ “ambition” and drive to win the Phillip Stroh case will cause tensions to rise.

“They’re not gentle and they’re not holding my hand in any way,” Velazquez tells TVGuide.com of her character’s interaction with her new colleagues. “I’m a fish out of water, and they’re showing me what the environment is like. So I just get thrown into these situations, and I learn quickly — maybe the hard way.”

But there’s a reason Emma doesn’t exactly get off on the right foot with the unit: She has been assigned the Philip Stroh case and is dismayed to learn her chief witness, Rusty (Graham Patrick Martin), is living under Capt. Raydor’s roof. Emma believes she has a better chance of winning the case if Rusty is removed from Raydor’s home, but you can guess where Raydor comes down on that argument. “The Stroh case is the big one, and she wants to win,” Velazquez says. “Both [women] are ambitious, and that’s where it conflicts. Emma knows the law, but Sharon is the Captain [with the] authority. Captain Raydor is so collected and calm, but yet she’s firm. She never lets it throw her off, which is something Emma hopes it would do. But it doesn’t work with her.”