Since Season Five of The Closer, Ransford Doherty has been showcasing his talents in the role of Kendall the coroner, in which he is often first on-scene to examine bodies and deal with the grisly after-effects of murder.  In this exclusive interview with MajorCrimesTV.net, the charming actor took some time to talk to us about the evolution of his character from The Closer to Major Crimes, share some stories from production, and tell us a little about his other projects, including his role on the award-winning webseries Caribe Road.

————————-
MajorCrimesTV.net: What was your audition process like for Kendall? Was it always supposed to be a recurring role?

Ransford Doherty: Before I went to audition for the role of Kendall on The Closer I was informed that it was a recurring role, but I always keep my expectations low when I hear the word “recurring”. This is a business and change happens all the time. I never expected to be in 20 episodes of The Closer. In fact, I didn’t even assume I was moving onto Major Crimes. I just take things in stride. Each time I get the call to be  on the show, I am filled with gratitude and joy. The day I stop getting those feelings and start taking this business for granted is the day I need to quit acting.

is a character that we saw frequently on The Closer, and now in Major Crimes, but we don’t get much time with him. Do you have more history for him than what we’ve seen so far on screen?

RD: In my second appearance on The Closer, in the episode called Time Bomb, I reveal that I have a son. He was sick at the time and I was waiting for my mom to sit with him before I went to the crime scene.

MCtv: Because Kendall is always the one determining initial cause of death, it seems you’re always out on location with the cast and crew, in and around the heart of LA. What is that experience like?

RD: I love filming on location! The streets of LA are as authentic as you can get, which really help you get into character.

RD: Many! One that comes to mind is the second episode of Major Crimes, “Before and After”. Wearing oversized rubber boots while carrying a wrapped corpse on a blood-soaked carpet is no easy task.  First of all, the actor who played the murder victim, played dead like his life depended on it. Felt like he weight 300 lbs! He was on his back, wrapped in a white sheet. I had to move his heavy body from an inversion table to Lt. Provenza, who was about 6ft away, without destroying any evidence in the crime scene. 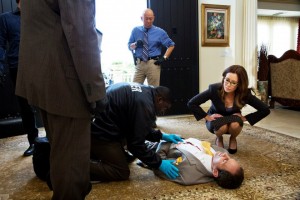 I thought if I stood over this man’s waist and lift him up behind his armpits it would be easier to move his body. So, when the director, Steve Robin, said, “Action!” I went all out! I picked up this heavy man like I was flipping a 2 ton tire in the Strongest Man Competition on ESPN. However those men on that show aren’t wearing oversized rubber galoshes while walking on a slippery surface. Unfortunately after about six steps, I lost my balance and my crotch landed on this poor guys face. Luckily his face was covered. What was beautiful was that no one broke character. I felt like a deer caught in the headlights because I didn’t move for about 3 seconds. I then shouted, “I’m ok, I’m cool, I got this, I got this!” to reassure the cast and crew that even though the situation looked awkward, I got everything under control. I said my lines, we continued the scene, the director said, “Cut!” and that’s when the roar of laughter from everyone came!

MCtv: What were your initial thoughts when Major Crimes was announced?

RD: When Major Crimes was announced, I was surprised and excited, but like I said before I didn’t assume I’d be part of the cast. High hopes hit the ground a lot harder when things don’t come into fruition. However, when I got the word that I would be in Major Crimes, I was jumping for joy. In fact, seeing my image on the Major Crimes billboard with the rest of the cast on the Sunset Strip was the icing on the cake! It was a true sense of accomplishment and a clear ‘sign’ that I really am in the Major Crimes family. Now that we have a successful season behind us, I’m ready for more. 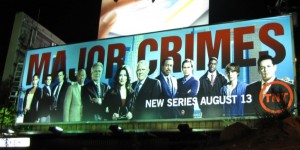 MCtv: Was there anything about the transition from The Closer to Major Crimes that surprised you?

MCtv: You’ve credited your teachers in high school and college for helping introduce  you to acting, and now in addition to acting you also work as a substitute teacher and as an advocate for arts education in schools. What brought you to teaching, and which advocacy and arts education programs are you involved with?

RD: What I like about teaching is seeing students witnessing the impossible become possible and being excited about learning. But it’s not a one-sided relationship- I too have to deliver the goods when it comes to teaching. I not only have to know the material, but make it fun and relatable to the students. When a student understands the material, which is my definition of learning, there is a confidence they exude. They then are able to teach others and take on the next challenge they face.

Now, there are times where it’s more than just understanding what’s in the textbooks. You have kids who come from homes where the education they get is dealing with gang violence, drugs, poverty, abuse or neglect and the only thing the student wants you to do is listen. Just listening can do wonders for a child because the undelivered communication that child has onto for so long, is now released. There are also times where the students and I just have fun. I remember having to teach a P.E. class that didn’t want to participate in any sports activities that day until I wagered a week’s worth of Subway sandwiches to the first student who made a shot from half-court with their back turned. Within seconds I had a line of eager kids! Check out this video and you’ll see the student who made the miraculous shot and got a week’s worth of Subway sandwiches from me!

As far as advocacy for arts education, when it comes to theatre, a lot of schools I have worked at have removed that curriculum due to budget cuts. However I was involved for several years in after-school programs such as LAUSD’s Youth Services, and LACER, which exposes kids to the arts. I really enjoyed it.

MCtv: On TV this year you’ve had recurring roles on both Major Crimes and Body of Proof, and  you’re also co-starring in the webseries Caribe Road (recently nominated for an Imagen Award as Best Drama Series). Are there major differences between working on a traditional TV series and a web series?

RD: Yes, there are differences. With Caribe Road, things are shot a lot faster than a TV series, has a much smaller crew (so everyone involved tends to wear many hats), and everything is produced on a much smaller budget. For a web series, we may shoot everything in one weekend and then come back 6 months later to shoot the next episode. On a major TV series we work continuously every week until the season wraps. I haven’t had any major challenges working on Caribe Road, really because of the work ethic behind the team that makes it. The creator of the series, Hector Luis Bustamante comes from the TV episodic world, so he knows exactly what needs to happen. I go in, get the script, shoot the scene, and that’s a wrap. That has been a huge blessing in itself, and has made the process very enjoyable.

————————-
In addition to acting, Ransford Doherty devotes his free time to his other passions, teaching and supporting the arts in education. As well as returning to Major Crimes in season two, he’s currently filming the final episode of season one of Caribe Road, and you can see him in an upcoming episode of the FOX series Touch.  Check out his website at RansfordDoherty.com and follow him on twitter @RansfordDoherty.