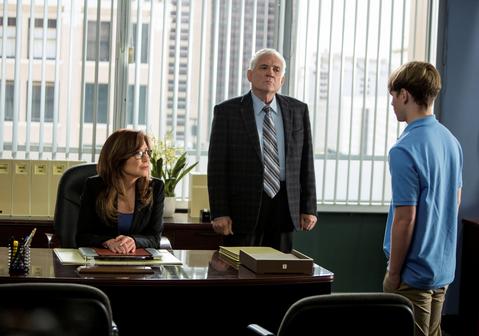 In a new interview with Chicago Red Eye, Mary McDonnell talks about the different facets of Sharon Raydor viewers will see in season 2, as her tensions with the D.A,’s office grow more complicated, her guardianship of foster son Rusty (Graham Patrick Martin) comes into question, and her relationship with her long-estranged husband is explored.

‘How excited you are for the new season?
I’m very excited. We’re in the thick of it and I am extremely pleased with the revelations of character, of relationship, of dilemma. I feel like in this ensemble is moving into just a whole new level of work. And we do have a new show on our hands. And what’s beautiful about it is that there was never a moment where we had to fully abandon the old, which we haven’t. But the organic growing into a new form has been such a delight to witness. So we’re all feeling very excited. It feels very fresh and I love that.

How has the show evolved?
Well, it’s changed in many ways. One is that if we just look at the reason that Sharon Raydor by story was put in the position that she’s in now, which is running the Major Crimes Division, has to do with some of her gifts which has to do with her ability to comprehend the overall—the politics of the state, the politics of the justice system. And all of those things are influencing the way justice can be disseminated. And she has a gift for the overview.

As opposed to another detective who is like a bloodhound who might have a gift for getting caught on one idea and following that line all the way through. Sharon has a gift for keeping the overview. So they put her in that position because the state of California can’t afford justice as it has been acted out prior to now. We can’t afford the convictions anymore. We have to figure out a different way to solution because the cost of keeping a convicted death row criminal waiting for trial and the cost of having appeals is so overwhelming and the state simply doesn’t have the money.

So what’s fascinating is that all of these politics and this situation is part of why she’s there. And finding out in fact that she’s actually really good at reformation and she’s really good at figuring out how to change the way things run. And one of the things that I’m discovering that I really love about her is that she’s a great leader in that she absolutely wants to draw out the very best of those around her. And so that has shifted them a little bit away from some of the power struggles that were running Season 1. It doesn’t mean to say there won’t still be power struggles in personality, but I think we’re in a new world in terms of the way we’re going about things as a team. And I love how she’s influenced that.’