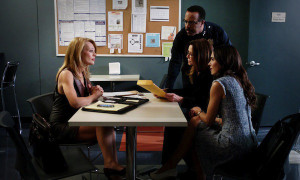 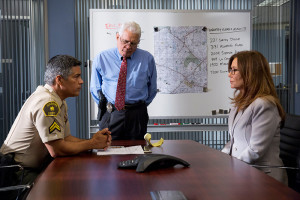 The winter episodes of Major Crimes promise to bring lots of action, excitement and some “major” guest-star power.

On his Facebook page, series creator James Duff teased about the lineup for tonight’s episode: “Bill Brochtrup and Esai Morales of NYPD Blue fame guest star on tonight’s episode of Major Crimes. “Jailbait” by Ralph Gifford and Carson Moore, directed by Mike Robin (who also directed the pilot of The Closer). Great performances from our guest cast and series regulars.”

Looking forward, Malcolm-Jamal Warner, of The Cosby Show fame, will be appearing in two episodes. Of his role TV Guide says, “Appearing in the Dec. 30 and Jan. 6 episodes, the onetime Cosby kid will play Lt. Chuck Cooper, a SIS (Special Investigation Section) supervisor brought in to help protect Raydor’s ward Rusty from his stalker, at all costs.” 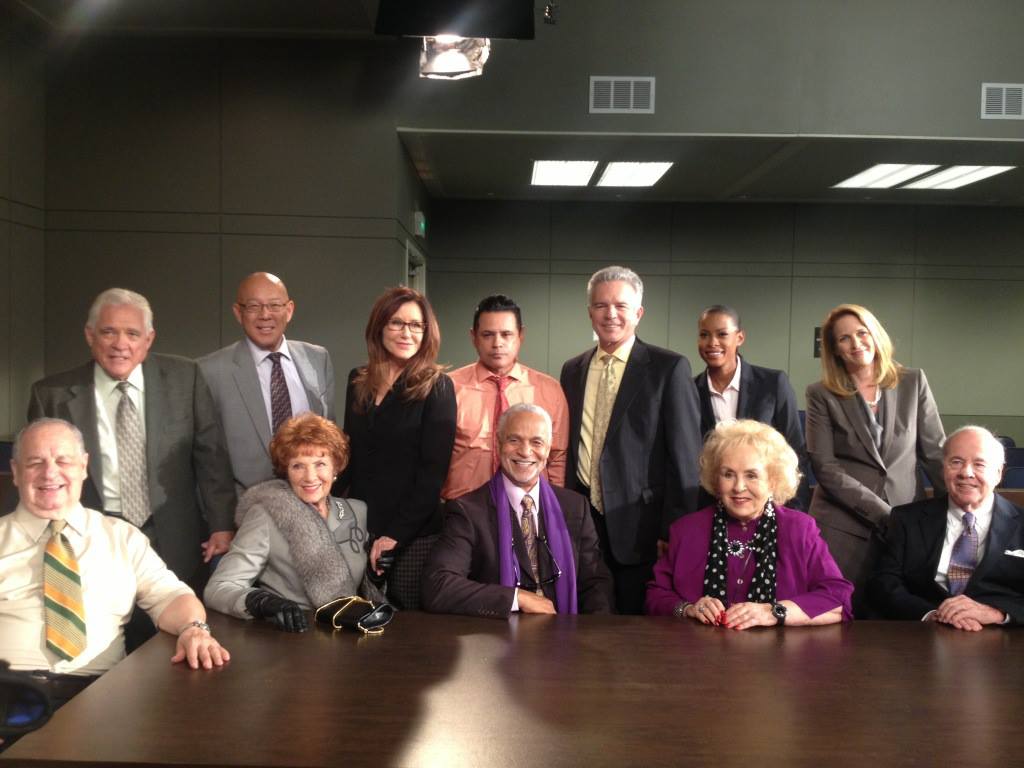 As we first reported last week, an upcoming episode of Major Crimes will feature a reunion of classic TV stars, and now we’ve got a photo from the filming from that episode.

The photo was shared by Series Creator/Executive Producer James Duff and the writer of the episode, Duppy Demetrius. Of the event, Demetrius tweeted “Here’s most of the Cast for Episode 209. It’s incredible to be working with so much talent.”

The episode is slated to air Monday, August 5th, 2013 at 9pm/8c. More information is available here.

Major Crimes has booked an ensemble of classic TV actors for an upcoming episode.

From the TNT description about the episode:

“Provenza faces possible permanent desk duty while the squad investigates the suspicious death of a loathsome ICE agent which brings them into contact with the residents of an ancient apartment complex nicknamed La Shangri-la.”

The episode, entitled “There’s No Place Like Home”, is slated to air Monday, August 5th, 2013. 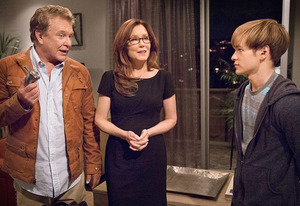 TVGuide has brought us our first photo of Tom Berenger on the set along with some exclusive information:

“Major Crimes police captain ­Sharon Raydor (Mary McDonnell) is getting a major pain in the keister this season when her estranged husband, Jackson (Tom Berenger), moves in with her starting July 8 for three ­episodes of the TNT drama. “He is ­extremely charming and funny,” says Berenger, who collected an Emmy last year for Hatfields & McCoy’s.

So why did the couple split? It seems that smilin’ Jack has an addictive personality. “He was a big defense lawyer at one point, making big bucks, but he had a drinking problem,” Berenger says. “He quit drinking, but then he started gambling in ­Vegas. He’s ­always out of money and the kids don’t want to talk to him. And now he’s gotten himself back in L.A. on the court-appointed attorney list.”

That’s how he turns up on Raydor’s doorstep, and he’s intent on winning her back. “Jack’s a hopeless romantic who still wears his wedding ring, but she doesn’t,” Berenger says. “He ends up sleeping on the couch.”‘

On the heels of last weeks announcement that we’d be getting to meet the long-estranged husband of Sharon Raydor this season on Major Crimes, now we get to put a face to the name!

TV Guide is reporting that Golden Globe winner Tom Berenger has been tapped to play Jackson Raydor. Jackson is reportedly “a brilliant, charming and charismatic attorney who has taken a long break from law to pursue his gambling passion. When the handsome high roller returns to Los Angeles, he accepts a job as a court-appointed attorney and becomes fast buds with Rusty. Not surprisingly, he and Sharon are expected to clash during Berenger’s three episodes.”

From the TNT Press Release:

“Tom Berenger is set guest star in three episodes this summer on TNT‘s hit drama series Major Crimes, which is set to kick off its second season in June.

Berenger won a Golden Globe® for his performance in Platoon and has starred in several other major films, including The Big Chill, Someone to Watch Over Me and Major League. Berenger was also nominated for an Emmy® for his role in hit television series Cheers.  His more recent work includes his role in box office hit Inception and Primetime Emmy award winning appearance in the television miniseries Hatfields & McCoys.

In Major Crimes, Berenger will play Captain Sharon Raydor’s estranged husband of 25 years, Jackson Raydor. A brilliant lawyer, Jackson has taken a long break from working to follow his real passion, gambling, but he returns to Los Angeles to work as a court-appointed attorney. Charming and charismatic, Jackson becomes fast friends with Rusty but Sharon continues to remain wary.” 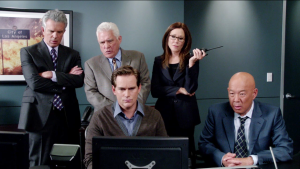 With the premiere of season two less than seven weeks away, plot details and casting spoilers are starting to be released!