TNT has revealed the title and descriptions of the first three episodes of Major Crimes season 3, as well as upcoming guest star casting information and we have your first look at what’s coming up for the Major Crimes Division.

This summer on Major Crimes, Jon Tenney will return as Agent Fritz Howard, who serves as the main liaison between the LAPD and the FBI. He also happens to be the husband of the former head of the squad, Brenda Leigh Johnson. Tom Berenger will be back as Jack Raydor, Capt. Raydor’s estranged but endearing husband who doesn’t always play by the rules. Bill Brochtrup will return as Dr. Joe Bowman, Rusty’s therapist who used chess as a way to get through to his client. And Malcolm-Jamal Warner will be back as Lt. Chuck Cooper, an undercover officer who helped hunt down a killer who targeted Rusty.

Ransford Doherty will return this season as Coroner’s Investigator Kendall, who often handles the initial crime-scene examinations of victims in the squad’s cases. And Kathe Mazur will be back as DDA Andrea Hobbs, the no-nonsense prosecutor who handles the legal side of the squad’s cases. Also this summer, Andrew Daly will return as Richard “Dick” Tracy, the eager wannabe detective he originally played in the fifth season of The Closer. And Azita Ghanizada will play Angela Soames, who works for a potentially shady cryogenic facility.

Cases the squad will be called upon to investigate in season three of Major Crimes include the disappearance of two kids and their father, the death of the defendant in a rape trial and a complex case involving arranged marriages and diplomatic immunity. In addition, one of Sanchez’s old cases will resurface when it turns out a man he put away for manslaughter might be innocent. And Provenza and Flynn will be drawn to a ritzy estate to investigate the murder of a dog, but they’re going to have to solve the case with unwanted help from an amateur sleuth they’ve encountered before. On the home front, Sharon Raydor will try to help Rusty put his turbulent past behind him, a goal made far more difficult when a member of the young man’s biological family returns, threatening Rusty’s hard-won stability.

TNT’s Major Crimes launched in 2012 and finished its first season ranking as basic cable’s #1 new series of the year. In 2013, the drama was one of basic cable’s Top 10 series of the year, averaging 6.8 million viewers for its second season. Among key demos, Major Crimes drew more than 2.1 million adults 25-54 and 1.6 million adults 18-49 in season two. 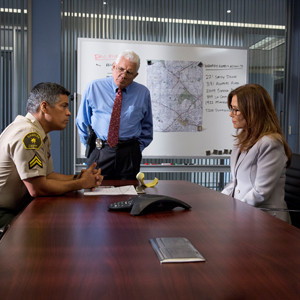 “Pick Your Poison” – Monday, Nov. 25, at 9 p.m. (ET/PT) – TV-14-DLV
After a bad batch of drugs claims the lives of two brothers, the race is on for the squad to find the dealer before more of their fellow high school students are threatened. Feeling smothered by his new around-the-clock security detail, Rusty faces a big decision.

“Jailbait” – Monday, Dec. 2, at 9 p.m. (ET/PT) – TV-14-DLV
When a newly released prisoner misses two back-to-back parole meetings, the squad is called in to track him down after the suspect’s therapist expresses concerns over his mental state.  Meanwhile, Sharon invites therapist, Dr. Joe Bowman (guest star Bill Brochtrup), to the office to evaluate Rusty over a game of chess. Esai Morales also guest stars.

“All In” – Monday, Dec. 9, at 9 p.m. (ET/PT) –TV-14-DLV
When a body turns up at a posh country club in a quiet neighborhood, the squad’s investigation leads them down a money trail full of surprises. Flynn is noticeably distracted on the job, and Emma’s actions have Rusty questioning her intentions, causing him to distrust her even more.

“Curve Ball” – Monday, Dec. 16, at 9 p.m. (ET/PT)
Christmas vacation is interrupted for the Major Crimes Division when a baseball scout is found dead in his RV. The squad works through the murder case, unfolding a complicated kidnapping scheme. Meanwhile, Rusty opens up to Dr. Joe (guest star Bill Brochtrup) about his mom.

“Risk Assessment” – Monday, Dec. 23, at 9 p.m. (ET/PT)
When a well-off graduate student gets shot to death in a gang-riddled neighborhood, the Major Crimes Division must work with the FBI, including Fritz Howard (guest star Jon Tenney) to find his killer. Throughout the investigation, it is revealed how each member of the unit became interested in joining the police force.

A year-end blowout sale becomes literal for a used-car lot after one of its owners is killed when a bomb explodes. While the squad tries to find who is responsible, Rusty dons a bullet-proof vest under the watchful eye of Lt. Chuck Cooper (guest star Malcolm-Jamal Warner), a SIS (Special Investigation Section) supervisor, in an attempt to catch the person responsible for threatening his and Sharon’s life.

“Return to Sender” – Monday, Jan. 6, at 9 p.m. (ET/PT)
The squad must work quickly to track down a serial killer before he strikes again. Meanwhile, things get dangerous over a game of chess.  Malcolm-Jamal Warner guest stars.

Season 1:
(Click on the title for more information and photo galleries for each episode)